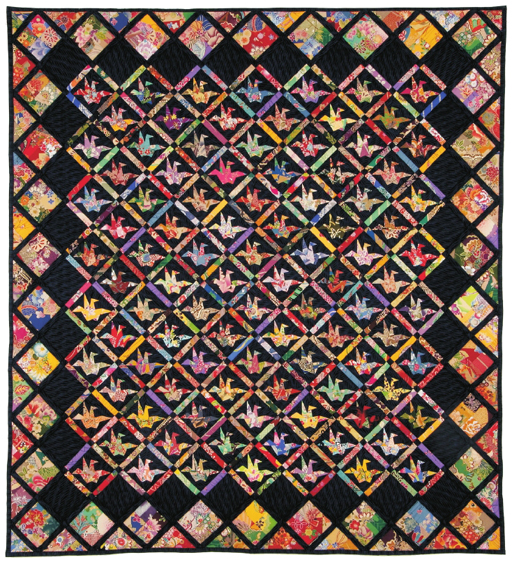 Margaret Rolfe: I made this quilt in a year when I had a lot of
travelling to do. I was hand piecing the little
sections of the Crane blocks, and this sewing
accompanied me on various trips around
Europe, Russia, America, and Australia. I find
hand sewing a soothing antidote to the stresses
of travel, useful for filling in odd half hours in
strange hotels and middle-of-the-night times
when jet lag precludes sleep. But above all, I
sewed these little blocks to express my heartfelt
desire for peace in a troubled world. Peace has
not occurred, but I believe it will never happen
unless we continue to strive for it.

The connection between origami (folded-paper)
cranes and the hope for peace came about
because of a young Japanese girl called Sadako
Sasaki, who lived in Hiroshima. She was only
two years old when the atom bomb was dropped
on her city. Sadako – along with her mother,
father, and brother – survived the blast, although
her grandmother did not. Sadako became a
healthy, active girl, a champion runner for her
school class. But radiation can wreak its deadly
effects for many years after its release, and
Sadako was diagnosed with leukemia when she
was 11. She spent many months in the hospital
before she died in 1955 at age 12. While she
was in the hospital, Sadako began folding paper
cranes because, according to a Japanese story, a
wish will come true if you fold a thousand paper
cranes. Sadako very much wished to be well
again, so she determinedly folded more than one
thousand cranes. Her wish did not come true,
however, and some of her cranes lined her burial
casket; others were given to Sadako’s friends.
Her classmates decided to create a memorial to
Sadako, wishing to remember their friend and
her courage and kindness during her illness. A
collection was begun, culminating in a statue in
the Peace Memorial Park in Hiroshima, which
was unveiled in 1958. At the top of the
memorial is the figure of a girl holding up a
large crane. Thus, folded-paper cranes came to
symbolize the desire for peace in the world. At
the foot of the statue are these words:
This is our cry,
This is our prayer,
Peace in the world. 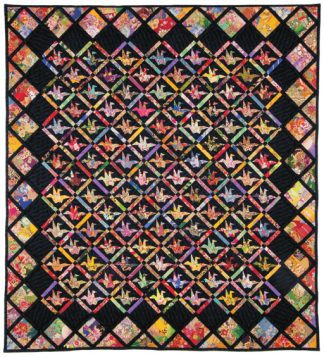 You're viewing: The Peace Quilt Pattern $17.95
Add to cart